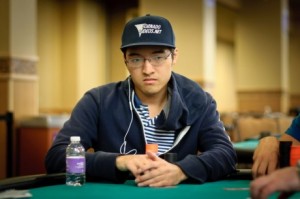 He could have been playing video games, but it’s pretty hard to make seven figures playing Command and Conquer. Like most of the 2011 World Series of Poker rookies we’ve been highlighting, Dan "jungleman12" Cates has spent his pre-21 years making a name for himself in the world of online poker. And nobody his age has done that better. Not since Tom Dwan, who we’ll get to later, has a young player made such a widespread impact on the game, quickly becoming a full-blown poker celebrity while he was still too young to buy a beer. Although he’s a "rookie" as far as the WSOP is concerned, Cates already knows his way around a poker table like few others do.

Cates, a 21-year-old pro from Bowie, Maryland, started playing poker in high school. Poker seemed like a natural transition for a kid with a serious video game habit. He cleaned up in the little $5 and $10 games around campus but found winning a little tougher at his local brick-and-mortar casino. When school let out for the summer in 2007, Cates tried his hand at the $.50/$1 and $1/$2 games around town. He was a pretty big loser that summer by his own admission, dropping about $3,000 while he tried to sort out the kinks in his game. That’s a lot of money for a high school kid, but nowadays, it represents just a couple of big blinds in the nosebleed games he frequents.

In the last year or so, Cates has gone on to become one of the legends of online poker. From a minuscule starting bankroll, he quickly worked his way up through the limits to to sit in some of the biggest games in the world. It wasn’t always a smooth ride, though, and rumor has it that Cates was holding down a job at McDonald’s during a time when his bankroll was busto.

Less than two years later, however, HighStakesDB shows "jungleman" had run up a profit of just more than $7 million online, playing anywhere from $.50/$1 to $300/$600. He no longer works in food service, in case there was any question about that. In 2010, Cates went from a virtual unknown to being the winningest online player of the year, racking up a profit of $4.9 million to put him ahead of Phil Ivey, Dwan, and every other player in the world. And he was already up $1.9 million in 2011 by the time tax day rolled around.

If memory serves, the 2010 PokerStars Caribbean Adventure was Cates’ first major tournament series. One only has to be 18 years old to play in the Bahamas, and Cates took advantage of that to notch his first career live cash as a minor. It was a 12th-place showing in the $1,500 No-Limit Hold’em event, good for a score of $9,085. It wasn’t much by his standards, but it was a chance for adoring fans to flock to his live rail for the first time.

Cates thought highly enough of his game that he took on a direct challenge from the player that many consider the best in the online world. In June, 2010, jungleman accepted the "Durrrr Challenge," a 50,000-hand battle with an additional $1 million on the side. Most of the poker community was on Dwan’s bandwagon as the challenge began, and he stormed out to an early lead in the opening sessions. It wasn’t long, however, before the new kid on the block adjusted his game and began to open up his own lead in the marathon match. When Black Friday shut down the challenge after 19 sessions, the two had played 19,335 hands, with Cates holding a solid profit of $1,251,059.

A few weeks ago, Kevmath started a thread on TwoPlusTwo, spilling the beans about an e-mail he received: "I wanted to let you know that Daniel Cates decided to do something really nice. He is buying one person into the Main Event. He will be tweeting (@junglemandan) his location around Vegas at least once per week starting next week and running through June 25. People will pick up a ticket from him at each location and a winner will be drawn. It’s free to join, no sign-ups or anything and the only stipulation is that they can’t have played in the Main Event before. He is also throwing in lessons and best of all, not taking a percent from any of the winnings."

It’s a generous gesture from jungleman, and it’s a PR move that should draw even more fans to his rail this summer. If anyone of this upcoming poker generation has a chance to make a mainstream splash, it’s Cates. He’s already been introduced to the masses thanks to an extensive article in the New York Times, one that brought the lifestyle of poker’s young, rich and famous to the front pages.

Cates shows the zeal and aggression that makes players his age so dangerous on the felt. In addition, he’s already taken on the best players in the world — one on one. And he’s beaten them. As long as the young man is motivated to play good poker this summer — even with just a scant $10,000 on the line — it could make for some of the most memorable moments of the series. The first time Cates draws a table with Dwan or Ivey, you can expect the poker world to stay up well past bedtime to watch.

Remember, PokerNews will be bringing you all the action from the World Series of Poker, so keep your browsers locked to PokerNews.com, and follow us on Twitter for up-to-the-minute news.