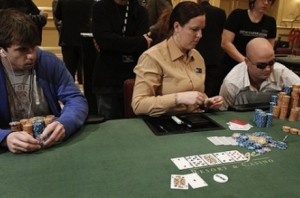 The final event of the traveling World Series of Poker Circuit season is over as the tour heads home to Las Vegas for the $1 Million National Championship. Sunday marked the final table of the Southern Regional Championship at Harrah’s New Orleans where nearly a quarter of a million dollars and a shiny diamond ring were at stake. In the end, those accolades — and all the chips — went to AJ Jejelowo, a 27-year-old amateur.

to give Kessler the winning set.

Gaubert was eliminated on the following hand, right alongside Kunal Patel. The double-elimination hand began when Patel opened the pot from under the gun. Allie Prescott three-bet to 35,000 in position and Gaubert called all-in from the small blind for his remaining one-big-blind stack. Patel four-bet for the rest of his stack with

and fortunately for him, Prescott called with

. Gaubert was well behind with

, leaving Patel in prime position to more than double up. The board, however, would not oblige as it came down

, giving the pot to Prescott with aces up with a jack kicker to score the double elimination.

WSOP-C Harrah’s Atlantic City Main Event Champion Matt Waxman was the next to go. He lost a key coin flip with

of Scott Lipshutz to take most of his chips. The flop fell

to give Lipshutz a set, making the

river meaningless for Waxman. Down to five big blinds, he hit the rail two hands later when his

Shortly after that, Kessler bowed out in sixth place. After Allie Prescott opened with a raise from under the gun, Kessler three-bet shoved with

. He found action from Prescott who held

and when the flop rolled out

, Kessler took a big lead. The

kept him there, but the

spiked on the river to give Prescott a set of tens, ending Kessler’s run.

Fifth place went to Lipshutz. He had about 25 big blinds left when he three-bet squeezed with

. Gary Friedlander had called a preflop raise and called the shove, as well, turning up

with a chance at the knockout. The

flop was a miss for the at-risk Lipshutz, but the turn

was a great card to pull him into a big lead with one to come. He had outs to fade, though, and couldn’t escape the

river that ended his day with close to $50,000 as consolation prize.

The four surviving players continued to battle for several hours with hardly any movement in the chip counts. Finally, well after the dinner break, Prescott began to slide, thanks to a few key pots. On the first, he dropped about half his stack when Friedlander strung him along on a

board. Prescott raised preflop, then called a check-raise on the flop and a big bet on the turn. When Friedlander barreled the river, Prescott knew he was no good and cut his losses by eventually surrendering. It left him short on chips, though, and he shoved

soon thereafter to seal his exit in fourth place.

Harry Cullen did about as well as possible by laddering himself through the knockouts and into three-handed play. He failed to open up his game as the table shortened, however, and soon admitted he was "dying a slow death" as his chips trickled down to single-digit big blinds. He got so short that his shove with

didn’t allow much fold equity, and Jejelowo made the call with his

slightly in front. When the board ran out

That left Jejelowo with about a 3:1 chip lead when heads-up play began, and he did not relinquish that spot. The lead got bigger for a moment before Friedlander started to chip up, but the final hand of the night followed shortly after midnight. Jejelowo made his standard open to 40,000 — twice the big blind — and Friedlander three-bet to 140,000. Jejelowo thought it over for a bit before shoving, and the call came quickly. Friedlander was well in front with

, and he was poised to double as the dealer spread

for the first four community cards. Nobody in the room expected to see the

on the river, least of all Jejelowo, who had just locked up the title.

AJ Jejelowo, the 27-year-old amateur has won the final gold ring of the 2010-2011 Circuit season. Born in Manchester, England, to Nigerian parents, he and his family moved to the U.S. when he was young. Jejelowo went on to attend John’s Hopkins University and is now pursing a career in medical research at Rice University in Texas — alongside a career in poker, perhaps. The new champ arrived in New Orleans on Wednesday and took a shot at the mega-satellite without intending to blow his bankroll. He won a seat that night, and his win should go a long way toward paying off his student loans. Jejelowo now has a shot to parlay his small investment into a second piece of jewelry as he plays for the bracelet in the WSOP-C National Championship next week.

That’s all from New Orleans, but we’re following the bus to Las Vegas for the National Championship. It runs from May 27 to 29, and we’ve got a ringside seat to bring you coverage of the first bracelet event of 2011. In the meantime, follow us on Twitter!