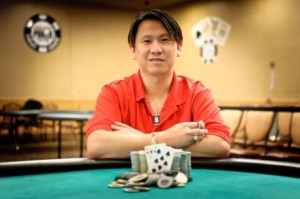 Although the $100,000 Super High Roller at the World Poker Tour World Championship was only supposed to last two days, play was extended to three after Erik Seidel and Erick Lindgren got into heads-up play. Seidel returned to the duel with the chip lead and went on to win the event for $1,092,780.

The match resumed with Seidel having a chip lead of 7.12 million to Lindgren’s 4.48 million. On the third hand of the day, Lindgren found a key double-up to really put the pressure on Seidel and knock him all the way back to 2.575 million in chips.

peeled off on fourth street to give Lindgren a full house. The river completed the board with the

, but it didn’t matter because Seidel was drawing dead. Lindgren earned the big double up and took the lead with 9.025 million in chips to 2.575 million.

Seidel battled and found a double-up a few hands later. On the 294th hand of the final table, Seidel was all-in preflop with the

and Seidel’s queens held up to move him to 5.55 million in chips. Still, Lindgren held the lead with 6.05 million.

for top pair and a straight draw. Lindgren held

for a flush and straight draw combo. The turn added the

to the board and the river finished things with the

. Neither card helped Lindgren and he was eliminated in second place for $700,500.

Seidel scooped the massive first-place prize of $1,092,780 and another major title having conquered the stacked field of the largest-ever buy-in WPT event. He’ll add that to his already $4.3 million earned in 2011 in what could easily be the best year anyone has ever had on the felt – and it’s only May! Surely, Seidel is the player to watch at the upcoming World Series of Poker. If he keeps playing and winning at his current rate, he could very well win every bracelet event he plays.