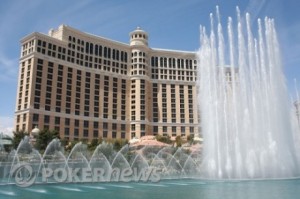 For the next six days, all eyes in the poker world will be fixed upon the Bellagio in Las Vegas, Nevada. The World Poker Tour World Championship kicked off on Saturday with 188 players handing over the $25,000 buy-in in hopes of winning one of the most prestigious poker events in the world. At the end of the day, and the first five levels of play, Christian Harder sat atop the leaderboard with 249,975 in chips. He’s followed by Ali Eslami with 240,475 and Kyle Julius with 237,675, to round out the top three.

As expected, this event had some of the biggest names in poker on the felt for Day 1. Justin Smith, Doyle Brunson, John Juanda, Sam Trickett, Michael Mizrachi, Chau Giang, Barry Greenstein, Eric Baldwin, Daniel Negreanu and Eugene Katchalov were just a handful of those big-time players who made it out for the first day of action. All of them will be moving on to Day 2.

Former WPT Championship winners Yevgeniy Timoshenko, David Chiu, Carlos Mortensen and Martin de Knijff were also in the field. Mortensen was the only one of that bunch to hit the rail Saturday, as he fell at the hands of Jason Somerville, who was also eliminated later on. The defending champion, David Williams, is planning on waiting until Day 2 to register for play.

Not many players hit the rail on Day 1, but joining Mortensen and Somerville were Frank Kassela, David Benyamine, Alessio Isaia and two-time WPT champion Antonio Esfandiari. David Baker was the man who made “The Magician” disappear during Level 4. According to the WPT Live Update Team, all of the money went in on a flop of

for a combo draw. Baker’s draw got there and Esfandiari was sent out the door.

Day 2 is scheduled to begin 1200 PDT (1900 GMT) on Sunday. Registration will remain open until the end of Level 8, or three full levels of play on Day 2. With 188 players already registered, the total field size should easily eclipse 200 players and top last year’s mark of 195. Be sure to stay tuned to PokerNews for the recap after the day’s play.